They say you learn a new thing every day. Well the other day I learnt to my surprise that Bird’s Custard Powder does not and has never contained egg. It sparked my interest so I went about having a look online to see the actual ingredients and whether or not I thought I could come up with something similar. Whilst looking I discovered the story behind its origins so thought I would share; 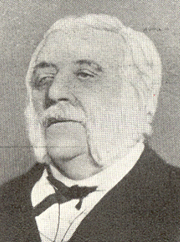 This distinguished looking fellow is Alfred Bird. He was a maker of food and a chemist in the 1800’s. Alfred’s wife Elizabeth was allergic to eggs so in order that she could have something lovely to pour onto her desserts he went about creating an egg free version of custard. Apparently the concoction he created (that we Brits now know as Bird’s Custard) was only intended for use at home for his wife but the story goes that it was “accidentally” fed to guests at a dinner party and then Alfred realised that perhaps his invention may be appealing to a wider audience and so Bird’s Powdered Custard was born.

I love the advert clearly stating at the bottom “custard without eggs!”. 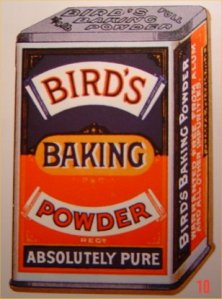 Further interesting allergy information is that Albert Bird is also the man who first came up with baking powder. Elizabeth was also allergic to yeast. Whether or not Elizabeth was or not allergic to egg and yeast or even if she was perhaps intolerant to them I think Albert Bird is quite clearly an allergy food hero and at the very least a great husband who didn’t see why his wife should miss out on the good stuff because of her inability to eat certain foods. Yay for Mr Bird! He is rightly honoured and acknowledged in the town he used to live;

So, thanks to the lovely Mr Bird we have Bird’s Custard Powder. The other thing that is great is that it is a fairly simple thing to make yourself at home. It is basically just cornflour with a few little extras added. The ingredients list on the tin reads; Cornflour, Salt, Colour (Annatto), Flavouring.

To make the powder into custard you add milk and a little sugar for sweetness. Obviously my custard would need to also be dairy free so I set about experimenting a little to come up with the best texture and flavour. I decided that for flavour I would use vanilla pods for the best flavour and the lovely speckled effect but you may use extract if you prefer.

I made two batches because I wanted to see how best to get the right colour. I used rice milk as the liquid in both of these batches.

For Batch one I used yellow liquid food colour;

The flavour was nice but I thought the resulting liquid was somewhat translucent and not creamy enough. The food colour gave quite a pale colour.

In batch two I used turmeric to colour the custard; 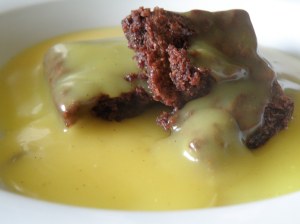 This gave a more authentic colour but you could taste the turmeric slightly which although was not unpleasant I feel some people may not like that and again I felt it was not creamy enough.

Below is the recipe I decided on. I decided that flavour should win over colour being authentic and used yellow food colour with a little orange added (my thought was to make more egg yolky in colour) and used half rice milk and half coconut milk for a creamier end result. I have to tell you that yes you can slightly taste the coconut in the end result but we all found the custard so creamy and delicious that we didn’t mind. You could always play around with the rice/coconut milk ratio but trust me and try it this way first. Would make amazing custard tarts!

*Variation; 1 tbsp of cocoa or 3 oz melted chocolate for a chocolate version. Add at step 3.

Lovely poured over pudding or set as a dessert in it’s self or in tarts and trifles. yum.