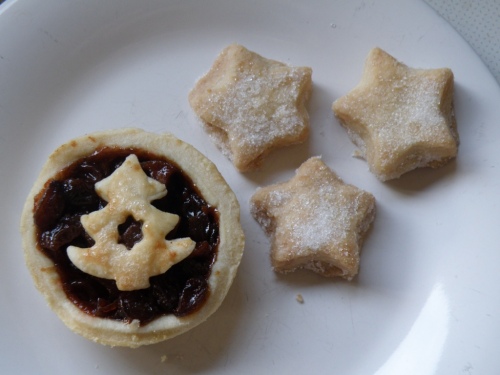 Hoping all had a lovely Christmas.

I have been desperate to try coconut oil for ages in baking so when I saw some for a reasonable price I snapped it up with the intention of trying to make some dairy free shortbread. I have tried before using dairy free margarines but the texture and flavour just isn't right at all, I hoped the high fat content of the coconut oil might give better results and I wasn't wrong. After a little research and comparison of butter and coconut oil I discovered that butter contains a certain percentage of water so I tried to replicate that as much as possible in the recipe. I am not used to getting it right on the first attempt so was thrilled they were so delicious. My five year old loved them and the tin had to be hidden in the end.

The coconut oil is better if used at room temperature otherwise it is a nightmare to get out of the jar as it sets so hard in the fridge (a lesson learned there) and the shortbread is easier to make in a food processor if you have one but by hand would work too I am sure. I made two batches, one batch I refrigerated the cut biscuits first and the other I didn't to see if colder cookies would spread less but it made no difference. So these don't hold perfect shape but I wasn't too bothered as they still look rather nice I think! 😉

2 thoughts on “Shortbread Biscuits made with Coconut Oil”