Levi is the reason I began baking allergy free. He had sensitive skin from birth really but from around five months old Levi’s skin started progressively getting worse. Rashes were all over his body especially his face and he was vomiting, had red itchy eyes and was sometimes wheezy too (particularly after his bath we noticed). I visited my doctor and we were both convinced that allergies were to blame for the eczema. I was convinced that milk was a factor. Since that was his main source of food. It was when the skin began turning into wet weeping eczema that I was referred to the hospital. I was feeling despair that the eczema bath oil plus creams were not stopping his skin from becoming worse. I am glad I took the pictures as a record now as it got so bad. 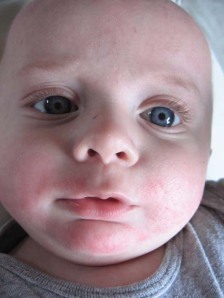 Below was when it was at its most severe. It makes me feel awful just looking at that picture, poor little man.

After then seeing a pediatrician and a dermatologist and eventually having some RAST allergy tests done it emerged that Levi was allergic to cows milk and potato. I was referred to a specialist dermatologist who then carried out some more allergy tests, this time scratch tests on his back. She tested for common allergens; milk and potato (to confirm), egg and peanuts which all came back positive. We were particularly concerned about the nut allergy. It then became clear why his skin had become so bad and why he had been wheezy after baths. The dermatologist realised that the bath oil he had been prescribed for his skin actually contained nut oil and even though I had reduced his bath time to once a week it was why his skin was becoming worse not better. The amazing thing was that as soon as we ceased using the oil and changed his milk his skin recovered to almost perfect in a matter of about a week or two.

At age one he was allergy tested again. He was still allergic to all he tested positive for before as well as tree nuts and soya which he was additionally tested for. We think that his egg allergy is quite severe. He had a reaction in november 2009 when hie eye swelled almost shut in minutes. 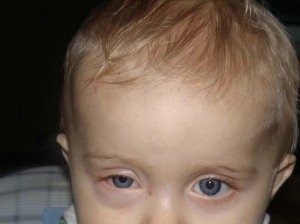 These pictures were taken a little while after when the swelling had gone down a lot but his eye was so swollen.

It has been a while since I wrote the above so I thought I should add an update. Levi is now almost three and still allergic to everything he tested positive to originally; eggs, nuts, soya, potato and dairy. They had thought his milk allergy had decreased but he had a reaction when he went for a food challenge so he is still well away from dairy at the moment. He still has the odd skin reaction that can be treated with anti histamines. He also now has the occasional asthma related problems at night and a few more severe reactions but luckily they are not very common. His most recent reaction was to nuts (we believe) we had to rush him up to the doctors when his eye swelled and his face became covered in hives on one side. Levi reacted to something on his Dad’s jacket, traces of food he had eaten at work the day before. Most probably nuts in some biscuits. It just goes to show how careful you need to be around him. Below is a picture of this reaction;

I should point out he was also a bit wheezy with this reaction which was another pointer towards nuts for us.

He has recently started school and so far no reactions. He has to be watched closely, especially after the other children have been eating but luckily we are doing well at the moment. He is due for more tests soon so hopefully some good news that some of the allergies are starting to decrease in severity. Time will tell. 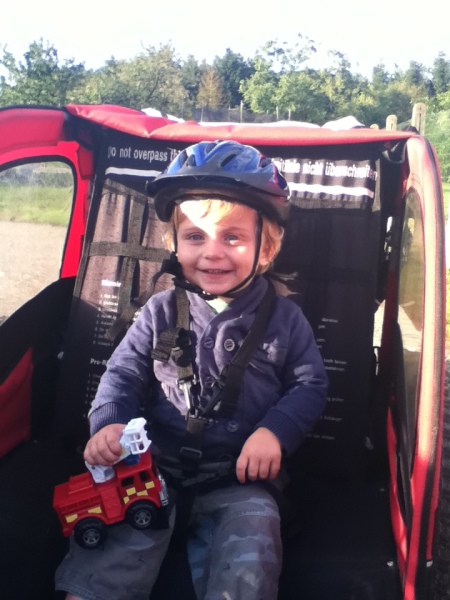 He’s a good boy really, takes it all in his stride and mummy bakes him treats every now and then so he doesn’t feel left out. One day soon he will start to realise he is a little different from the other kids at school but for now I don’t think he realises and hopefully we can work around those future issues the best way possible so he feels happy with it all.