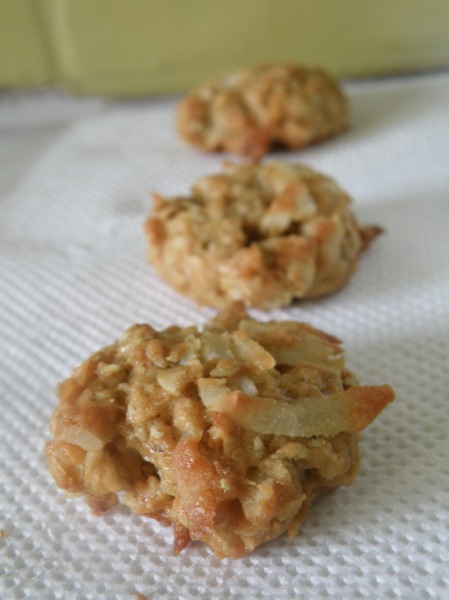 I saw a recipe for ANZAC Biscuits in a food magazine recently and thought how simple and tasty they sounded. Like an oatmeal cookie with coconut added, yum, what’s not to like?

ANZAC stands for “Australian and New Zealand Army Corps” and it is believed wives used to make the cookies and send them out to their husbands fighting in WW1. The ingredients used kept well during their transportation to the fighting soldiers and the fact they do not contain eggs helped them keep longer. Also the fact they do not contain eggs is good news for me because it makes adapting them pretty easy.

The problem I encountered however was finding dried (or desiccated) coconut that did not have a “may contain nuts” sign on the packaging. Eventually I decided that it really couldn’t be that difficult to make so bought a whole coconut and went about making some myself. For anyone else facing similar problems I will add the “recipe” for that at the bottom, below is the recipe for the ANZAC Biscuits. The recipe is adapted from a Bill Granger recipe I found online and the cookies were really delicious, my only regret is that I didn’t have any Golden Syrup at the time so used a Belgian syrup, although I think it worked rather well I will definitely try them again with Lyles Golden “Gold”. Also I decided to make my coconut quite big in comparison to “normal” desiccated coconut you get in a bag. More “rustic” let’s say.

2) Place butter and syrup/honey into a saucepan over medium heat and stir gently until melted.

3) Place bicarb of soda in a small bowl and add hot water. Stir to combine. Add bicarb mixture to saucepan and stir. Pour over dry mixture and stir all ingredients together to form a dough.

4) Roll teaspoon of biscuit mixture into balls and place on a baking paper lined baking tray, leaving room for spreading. Flatten each ball gently with a fork. 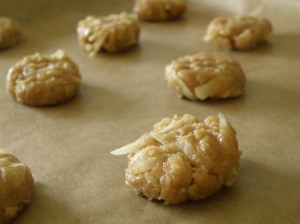 5) Bake biscuits for 15 – 20 minutes or until biscuits are golden brown at the edges. The centres will be slightly soft but will harden when cooled. Allow biscuit to cool slightly on trays before transferring to a wire rack.

These were very delicious and I will definitely be making them again especially for the school lunch boxes but also for me and my cuppa tea! 😉 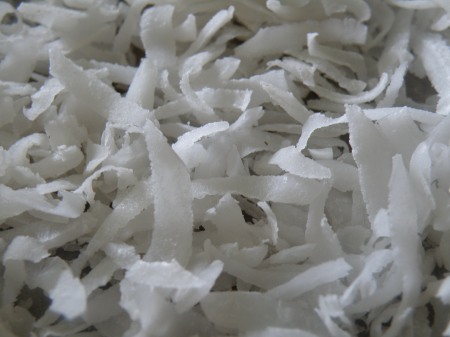 This is actually very simple to do. The only time-consuming task is separating the white coconut flesh from the coconut once that is done you are ready to roll!

1. Smash, scrape and do what you have to do to get that coconut out of the shell (for me it involved various tools including a bag, a rolling pin, a spoon and a knife). 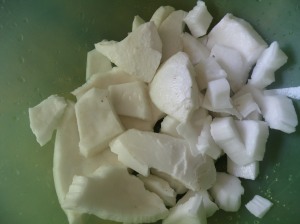 2. Next decide how big/small/thick/fine you would like your coconut to be and grate away.

3. Spread onto an oven tray lined with baking paper. Heat the oven to about 90 c (very low). Put in the oven and keep checking and moving it about until it feels sufficiently dry to the touch. Remove from oven and set aside to cool.

Hey presto! Dried coconut! My one coconut made about 100g of dried coconut (or one cup).